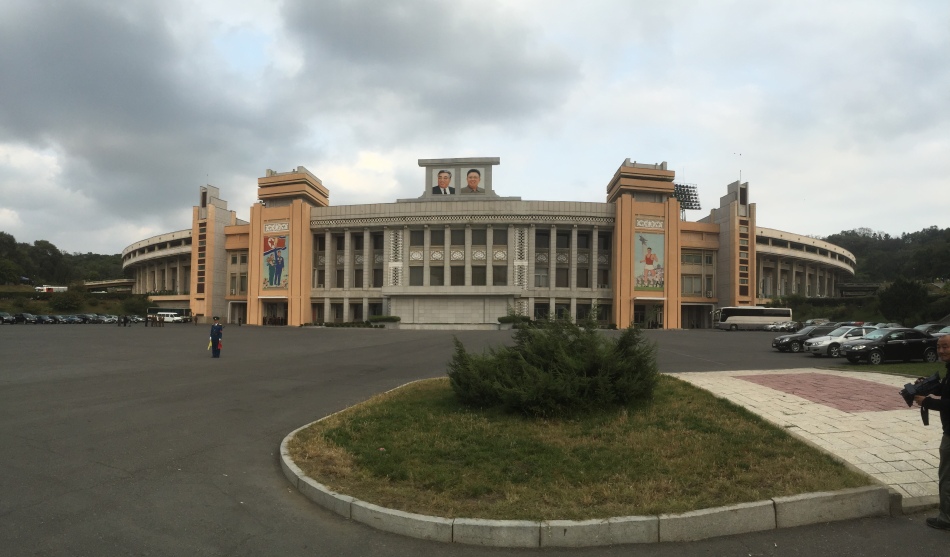 One hour in North Korea (DPRK) and I’m outside the Kim Il Sung Stadium, being handed a ticket to watch a 2018 FIFA World Cup Qualifier between North Korea and Philippines.

Earlier that day in Beijing

As we were checking in to board our one-star rated plane to Pyongyang from Beijing (one of only two entry points by plane to North Korea), we were told of the opportunity to watch a football game in Pyongyang.

As a huge football fan, and avid traveller, I try to catch a local match wherever I go. This was a dream; watching a game in the hermit kingdom of DPRK – what an opportunity.

After convincing my friends with whom I was travelling that this would be 100 times better than the museum visit which was the alternate activity on the tour itinerary, we secured our tickets through the guides for the limited spots.

We’re late… Security took so long checking all our belongings and digital assets (no religious or south Korean movies or books allowed in) that we had little time to get into our correct tour groups and on the right bus for the match.

Our first view of North Korean life and it is on a minibus to the football: epic! There isn’t quite the atmosphere you’ll find on away day minibuses cruising the motorways of the UK on a Saturday morning, but still a lot of excitement amongst the tourist fans that had come from across the world for this seven-day tour of DPRK. I might have even had to explain the offside rule to some of my fellow ‘fans’.

One hundred metres away from the stadium and we can see a trickle of fans streaming down the main road leading towards the Arch of Triumph (yes like the one in France, but 10m taller) where we swing a right onto the stadium car park. First impression of the 50,000-seater stadium is that it has a hint of the Old Wembley to it, with similar towers in front and similar oval shape.

We’re late, hence why there is just a trickle of fans; most are inside already. The game kicked off 15 minutes ago. We dash to the entrance with our tickets, only to be met by a 6’4” soldier with a gun denying us entry

Our 5’4” local guide argues with him to let us in, like an overconfident chihuahua picking a fight with a Great Dane., but it seems to work. After the soldier locks the door, our guide’s pandering and the commotion it seems to have caused pays off as we are led into the ground whilst hundreds of eyes stare back at us.

I’ve no idea what has happened but as we are ushered to our seats, we see soldiers ushering local fans out of our seats and into the stairwell – awkward. “Bloody tourists coming in and taking our seats” they must be thinking.

It seems that at kick off they give away seats to locals that have queued in case of no shows. At least it fills the stadium.

As we take our seats, I get my first proper view of the stadium. Oval in shape, it has a running track around the pitch and limited facilities. It did have a little screen on one side and a scoreboard on the other. No fancy boxes, just an elevated platform for TV and what looks like VIP seats overlooking the half-way line. However, I am told the VIPs get a lounge with some vile coffee and a selection of biscuits.

The score was still 0-0 and so it would remain that way till the final whistle, but that didn’t stop the fans – well at least half of them – making a racket. Half the stadium was filled with kids leading a synchronised performance to generate an atmosphere. Songs, clappers, a band and dressed in colours to make up the national flag. It was quite a sight and helped the atmosphere.

The other half of the stadium, which we were in, was made up of locals and military personnel. Around us, we’re surrounded by locals. A couple of the tour group know a few Korean words having visited the south previously. We try and interact with them without much luck; the atmosphere in this half of the stadium was… civilised. Some subdued clapping here and there, but I guess there isn’t too much of a culture of standing out around these parts.

The game was fairly drab and so I became a North Korea fan, and despite not knowing any of the players, got pretty into supporting the team; it makes it more interesting. As my friend and I stood to berate the ref or cheer on the team during a bit of good build up or a promising shot, our enthusiasm started to rub off on the locals.

The ball goes out for a North Korea throw and a local North Korean fan cheers his team with fists in the air. He turns around for validation that he’s doing it right and me and my friends give him a high five. I would’ve loved to have seen the reaction had North Korea scored a goal!

At half time we go to check the facilities. 1 out of 10. A leaking toilet block was grim, and the cold concrete stadium didn’t offer much else during the half time break. We were glad to see the teams emerge for the second half.

Sixty minutes in and our little section is more animated than ever and certainly seems to be having much more fun than the rest of the stadium! Shame that the quality football is still so poor.

I must say it is quite a neat, does-the-job type stadium. It’s not going to have the modern facilities we’re afforded or expect in western Europe but it’s a nice bowl stadium with a good atmosphere, even if it is a bit artificial (as is the pitch). I have been to worse in Europe.

As the game ends, we follow the crowd out to the parking lot where, as we wait for our group to reassemble, I notice all the images on the stadium or the statues in the car park are of athletes – but no footballers. North Korea did not qualify in the end for the 2018 World Cup and I’m not surprised.  It does seem that football is the main use of the stadium, but North Korea are more successful in running competitions according to the guides.

And so three and a half years on, in April 2019, I find myself in the stadium once again; but this time on the pitch being cheered on by 50,000 fans as I got ready to start the Pyongyang marathon.

I had been set to visit Seoul, South Korea in June 2020 to watch the mighty Heung Min Son (yes, I’m a Spurs fan!) take on North Korea in another World Cup Qualifier. The first game ended 0-0 behind closed doors in the Kim Il Sung Stadium, and was the first time in 29 years the South Korea Men’s team had been allowed into North Korea to play them.

Bring on Seoul and the rematch. Should be tasty!

This feature was guest-written by Rishi Chowdhury, a huge Spurs fan from London who travels a lot and tries to catch a game wherever he goes. Loves a good away day! Feel free to tweet him any questions: @SpursRC