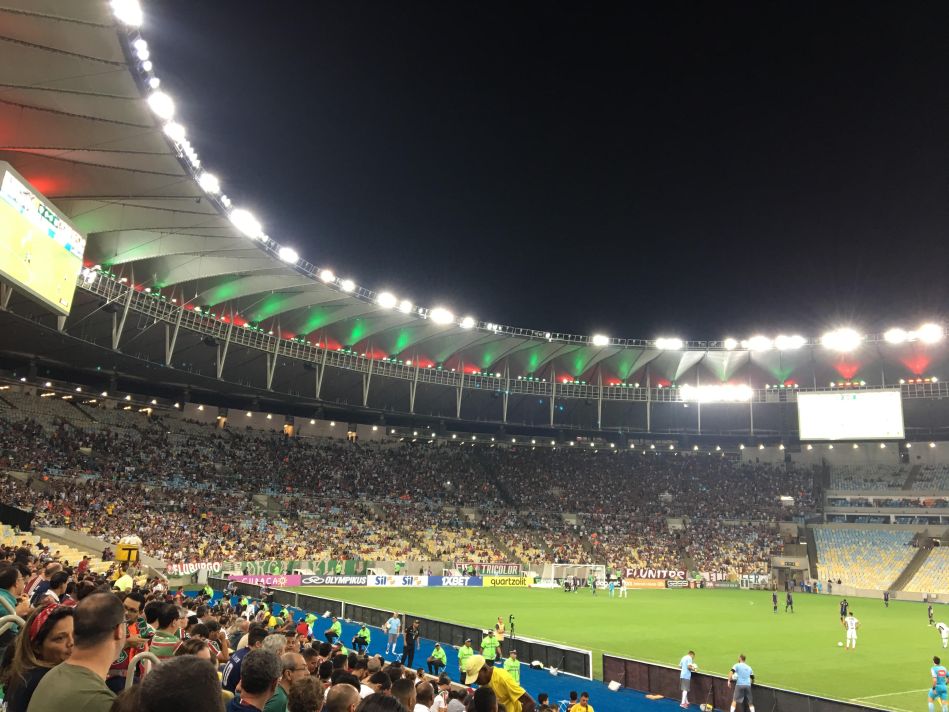 The Maracanã. Brazil’s home of football and perhaps the world’s most famous stadium. The national stage, which turned generational greats like Pelé, Romario and Ronaldo into legends. Much to the jealousy of friends and family back in the UK, I had the chance to experience it in all its glory.

Although it wasn’t quite the Seleção, an evening kick-off for carioca side Fluminense provided me an excuse to see the stadium with my own eyes, and to catch some fiery Brasileirão action while in the cidade maravilhosa.

After spending six months studying in Porto Alegre in the south of Brazil, I had plans to travel the rest of the continent, with the first stop being Rio de Janeiro. Despite having been lucky enough to visit the city earlier in the year for its incredible Carnaval celebrations, I was still yet to set foot in the legendary Maracanã – a mission I was determined to complete before leaving such a wonderful country.

Back in Porto Alegre, I had become an adoptive gremista and would follow local side Grêmio’s progress in the regional championship, giving me an introduction into Brazilian football. Grêmio, along with city rivals Internacional, are one of the bigger sides in the country, and hold three Copa Libertadores titles, with the most recent coming in 2017. Conveniently, the club colours include light blue and white which, as a Manchester City fan, made me feel right at home.

Alongside iconic landmarks Christ the Redeemer and Copacabana beach, Rio de Janeiro is home to around 11 million people – and a number of different football clubs. Flamengo and Fluminense – who both call the Maracanã home – are joined by Botafogo and Vasco da Gama as the area’s four major players.

Flamengo are considered Brazil’s largest club and often sell out the Maracanã, leaving Fluminense as my best bet for a game. Hearing from a friend of an upcoming midweek fixture against Ceará – a team from Fortaleza in the north of the country – I jumped on the chance to get myself there.

Opting for a taxi, I made my way to the stadium. The driver told me to watch myself once I got out of the car, claiming that the area around the stadium can be particularly rough, even by Brazilian standards.

The norm for Fluminense fans was, seemingly, to purchase tickets on the day, as every office was met with a mile-long queue. Outside the ground, atmosphere was building, with fans drinking, chanting, and setting off flares in anticipation of an explosive fixture.

After an hour or so of queueing, I had myself a ticket and headed towards the large concrete gates that marked the entrance to the ground. I could almost taste the history as I made my way in, passing through concourses dating back to 1950, juxtaposed with the modernity of the recently renovated arena.

Yet, finding my seat, I was left slightly disappointed by a depleted crowd. With the ground barely one third full, it was hard to imagine that back in the 1950 World Cup almost 200,000 people had stood in this stadium, as Uruguay shocked Brazil and lifted the trophy. Still, however, noise created by Fluminense supporters filled the arena, carried by excellent acoustics in the stands.

Given Brazilian football’s reputation, the game itself was a characteristically feisty affair. Knowledge of the South American game within Europe rarely extends further than Argentine goliaths Boca Juniors and River Plate, conjuring up images of riots between rival fans and even clashes between opposing players. Brazil is no stranger to fan violence either, with football a way of life and the league system very attentively followed across the country.

Within just minutes of the referee’s whistle, I had already seen several crunching tackles and end-to-end goalmouth action. Forcing save after save out of the Ceará goalkeeper was attacking midfielder Paulo Henrique Ganso – one name that football fans and FIFA addicts may recognise; the former Sevilla star was famed for his tricks and long-range strikes.

Ceará keeper Diogo Silva had his work cut out for him as Fluminense continued to launch shots his way until they eventually took the lead just before half-time through number 9 Pedro. Before the break, however, there was still time for more, as Ceará defender Tiago Alves levelled proceedings with an impressive bicycle kick.

All square at the Maracanã, I headed back inside to grab a quick half-time snack. In England I’d normally opt for a pie or a burger at this stage, but food options tend to be a little different in Brazil, of course. Brazilians seem to be obsessed with popcorn – or pipoca – with it readily available on street corners wherever you walk; likewise, stands indoors here were selling bucket loads of the stuff.

Instead of popcorn, though, I treated myself to an ice cream to combat the rising temperature inside the ground. I also armed myself with a refreshing can of Antartica, a Brazilian beer, before ambling back to my seat.

Ganso continued to boss the second half for the Rio side, though despite several more attempts on goal, they could not find a winner. Ceará thought they had nicked the tie through Mateus Gonçalves, only for his goal to be ruled out following a lengthy VAR decision, much to the delight of the Fluzão supporters.

With the match ending in a draw, I left the ground with a sense of accomplishment, having sat in the Maracanã and experienced Brazilian football at its scintillating best. Despite not having seen the arena full to the brim like I was expecting, I still recommend the stadium sit on the bucket list of any avid football fanatic. South American football is an experience you will never forget.